Ayrton is very proud to announce that its new ultra-compact Levante™ and Diablo™ 300W LED wash and profile luminaires are ready to ship and will be celebrated in full force at Prolight+Sound 2019.

Levante – the Sculptor of Light
Levante is a dramatically miniaturised version of the Bora wash light, endowed with outstanding performance capabilities in an ultra-compact form that matches the dimensions of Mistral™.

With Levante, Ayrton has created a wash luminaire that can actually sculpture light and added a high-transmission diffusion filter to the zoom lens group to erase the edge of the beam without changing its angle. A variable linear frost system allows the user to adjust the desired diffusion level with precision.
Weighing just over 20kg and with a light output greater than 20,000 lumens, Levante’s optical system is specially developed for optimum wash applications. Its many features include a barndoor module allowing shutters to be positioned across 100% of the surface area, a CMY colour mixing system, a variable CTO and a wheel with seven complementary colours, for an infinite palette of vivid pastels and saturated colours. In addition, a 15-blade iris diaphragm and a wheel with seven indexable rotating gobos are supplied as standard.
Levante is a marvel of technology that will attract the most demanding lighting designers. 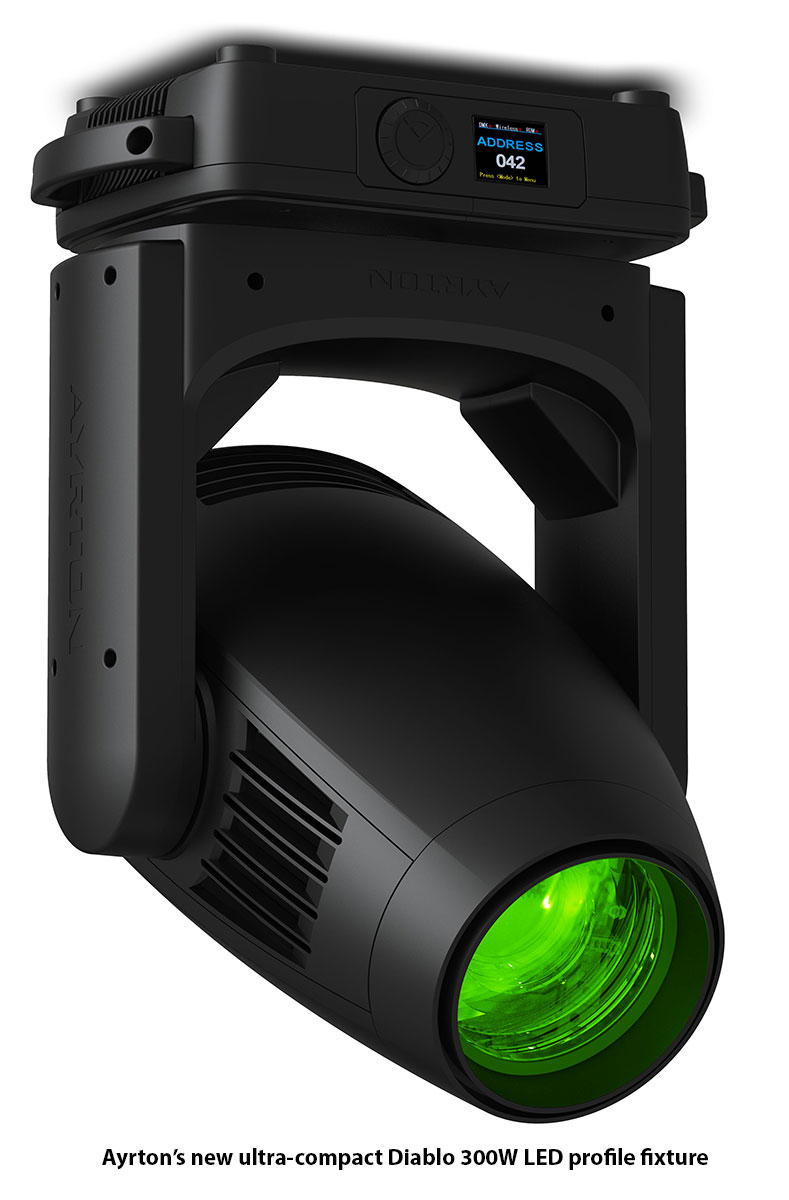 Diablo – Smaller is Remarkably Better
Weighing just over 20kg, Ayrton’s innovative, ultra-compact Diablo™ is the smallest, lightest and most efficient LED luminaire of its type, with a record output of 19,000 lumens from its 300W source. Versatile and feature-rich, Diablo matches the ultra-compact Mistral™ dimensions, and joins Khamsin™ and Ghibli™ in Ayrton’s stunning new profile luminaire range.

Both Diablo and Levante are available in two versions: Diablo-S and Levante-S are specially designed for stage applications with a ultra high output monochromatic 6500K LED light source; Diablo-TC and Levante-TC are geared for applications that require perfect colour rendition, using a monochromatic 5700K light source with a native CRI greater than 90 and high TM30 readings.
To see Levante and Diablo in action alongside the fast expanding range of Ayrton LED fixtures, come and witness the fabulous and much anticipated Ayrton lightshow which will also include Ayrton’s Ghibli, Bora, Khamsin, Mistral, Merak and NandoBeam fixtures, along with Ayrton’s favourite effects luminaires and a few exciting new creations, all of which have ensured Ayrton remains one of the favourite brands for creative lighting designers.
More information on the extensive portfolio of Ayrton LED fixtures can be found at www.ayrton.eu