Core to the strikingly impressive lighting design by Mark Butts, production and lighting designer at Los Angeles-based Preset Productions, are 103 Ayrton MagicPanel™-602 fixtures, supplied by global rental company VER. These help realise a unique design intent by Butts and co-production designer and show director, Raj Kapoor, whose aim was to start forging a signature ‘brand image’ for the band.

For Butts and Kapoor, it was the first time of touring with OneRepublic. “We have worked with the band before, but never on a big tour, and we were keen to start developing a visual style and brand for them which really captures their personality and image,” explains Butts. “We wanted this tour to be the first step in defining the OneRepublic style and to make them known for their live shows in a similar way to iconic bands like Muse, Rammstein, U2 or Nine Inch Nails.”

The Honda Civic Tour is travelling with a big lighting package but Butts did not want to conform to a conventional ‘big’ light show. “We wanted to create something different for the band, something very architectural and very modern that would really focus down on them and provide an interesting environment for them to play in,” he says.

As a starting point, Butts and Kapoor rigged ten lighting trusses in pairs at a 35° angle to form a series of receding ‘triangles’ which get progressively smaller upstage. These were loaded with 103 MagicPanel-602 fixtures to create a type of architectural ceiling piece with which to frame the band.

Despite the two downstage trusses being on a Kinesys system (to allow them to be flown out during the sponsor’s promotional videos at the interval), there is very little movement in either the trusses or the MagicPanel-602 fixtures during the show, with only one acoustic moment when the trusses are dropped in as an interesting backdrop for the band.

“As part of the architectural effect, we envisioned the show’s dynamics coming almost exclusively from the selection on the face of each MagicPanel-602,” explains Butts. “We deliberately kept our use of colour to a minimum, using only five colours – red, blue and different shades of white – in the whole show and, barring one number, each song is entirely monochromatic. This keeps it clean and modern-looking, and we can make all the statements we want to make with all the other tools we have.

“One of the reasons I was drawn to MagicPanel-602 was, if we weren’t going to achieve dynamics from movement or colour, it had to come from somewhere else. And that ‘somewhere else’ was from the selections on the face of the MagicPanel-602, and creating strong imagery using different chunks of the rig.” 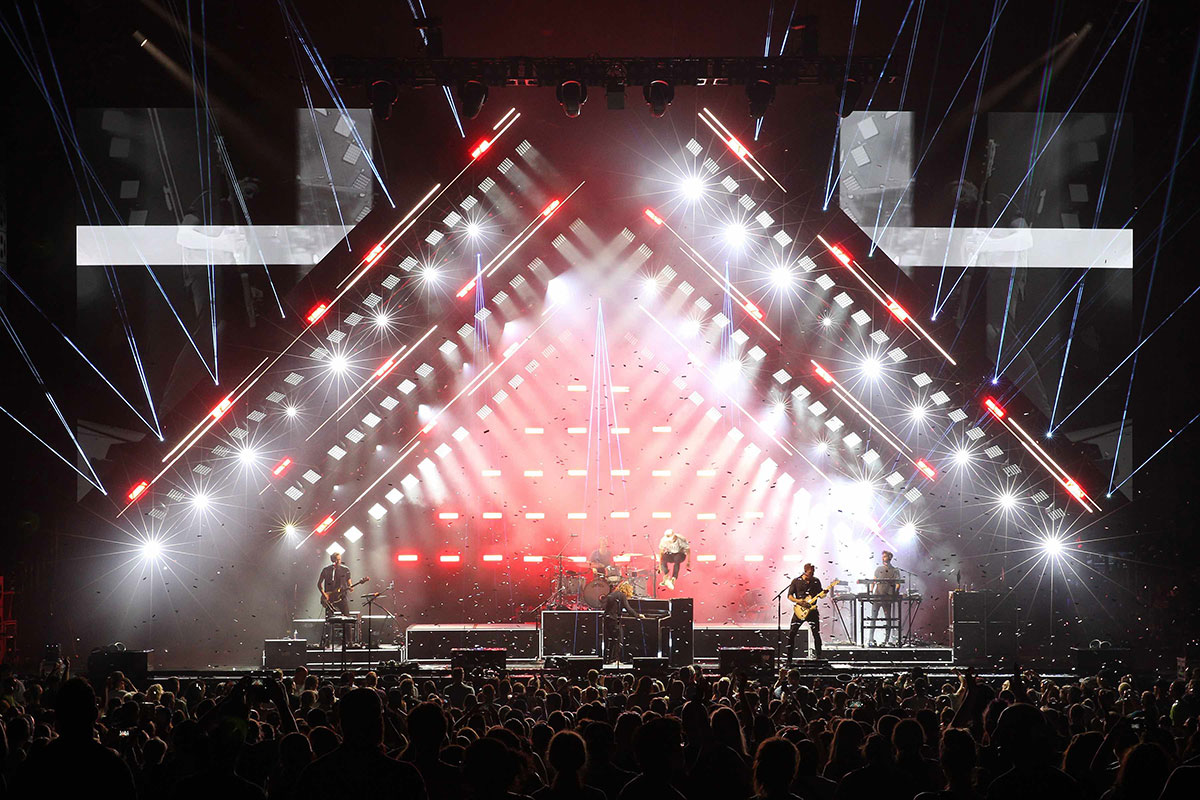 Butts has achieved some truly unique looks by using the face of the MagicPanel-602 to stunning effect with some very individual results. “One of our rules is never to allow ourselves to let the MagicPanel look like a MagicPanel! It would be too easy to turn them on and run a dimmer effect through them…but we don’t want the easy way! We want something no-one has ever done before, that will make the audience think, ‘how they hell do they do that?!’

“One of my favourite effects is to select the outer four corner ‘pixels’ of each panel and do a little dimmer chase through it. It looks like a shimmering star field, and if you do it right with just a small pan and tilt, it looks like the whole thing is breathing and moving in a very organic kind of way. So it’s a cool way to take a very ‘techie’ type of fixture and make it look like something completely different, to the extent you can’t really tell what you are looking at.”

Butts and his team also make a point of never using the same effect twice, so there is always a different selection on the MagicPanel face. With a 24-song set list over a 90-minute show, that demands the creation of a lot of different looks: “Brian Jenkins, our programmer, must get some credit for that as he was a big part, along with A.J. Pen, OneRepublic’s lighting director of six or seven years, who also worked closely with us on that. Brian’s speciality is to dig deep into that side of things. It might take twenty minutes to set up an effect, but it will be something that no-one has ever seen before.”

MagicPanel-602 was first released by Ayrton in 2013 but Butts is adamant that the MagicPanel-602 still has a lot to offer. “MagicPanel-602 is so versatile that you can just keep changing the programming and never repeat yourself. You can make them look however you want. Even though the MagicPanel-602s are the older models, I feel there is still so much untapped potential with those fixtures.

“I think good design and clever programming doesn’t necessitate the newest fixture every time. You can use something older and still get a great show out of it, which is what we did. We were able to get a large number of them fairly inexpensively, use them creatively and still give the band a HUGE bang for their buck.”

Jenkins and Butts used a GrandMA2 console to its full potential to programme the show: “The GrandMA and Ayrton fixtures work together very well,” Butts says. “As programmers, we have collectively devised an approach to programming the MagicPanels that is really easy, fast and clean, and allows us to achieve complicated looks without a huge amount of hassle. Originally this was thrust upon us because the MagicPanel became so popular and showed up on so many shows! It took a little while to work out how to use them at first…and then it just blossomed and opened up all these other programming possibilities for what you could do with them. I think that is why the MagicPanel units are still so popular – there is still a ton of stuff we haven’t done with them!”

The MagicPanel-602 fixtures travel easily in pre-rigged truss and are consequently valuable space savers in a shed tour that travels with only six or seven trucks. “We don’t have space for a lot of production, weight or power so it made sense to use an LED product like MagicPanel-602 because they don’t use much power, they don’t take up much space, they are not really heavy,” concludes Butts. “There are so many different positives as to why we would go to a product like this, and the logistics feature heavily alongside the aesthetics in trying to produce this huge looking production on a budget.”

The 16th annual Tour launched in Kansas City on 7 July and finished in The Woodlands, Texas on 12 September, before crossing the Pacific to Asia for more dates between 17-25 September.

More information on all Ayrton’s LED lighting products can be found at www.ayrton.eu