In June, MAX \ MAX designed, created and produced the luxurious landmark anniversary event for Swedish brand Oriflame, celebrated at Moscow’s giant Olimpiyskiy Stadium (Olympic Stadium). The event was split into two main sections, a business conference followed by a formal gala dinner, the Banquet of Directors. The MAX \ MAX team was tasked with creating entirely different lighting looks for each, to follow in quick succession.

“For this production we worked closely with lighting designer Evgenii Juhnevich to create straight and calm lighting looks for the conference on the first day and a dynamic, bright and complex lighting for the Banquet,” says Maxim Martynov, CEO of MAX \ MAX Productions.

Providing the versatile front and rear light for the Oriflame event was the Scenius Profile. “We expected good results from the Scenius as we know and trust the Claypaky brand,” says Martynov. “Yet we were still surprised by what the fixture could do. As well as being a strong profile light it also works great as a dynamic moving head. The fixture’s ability to move and focus swiftly allowed us greater creative potential and versatility during our design phase.” 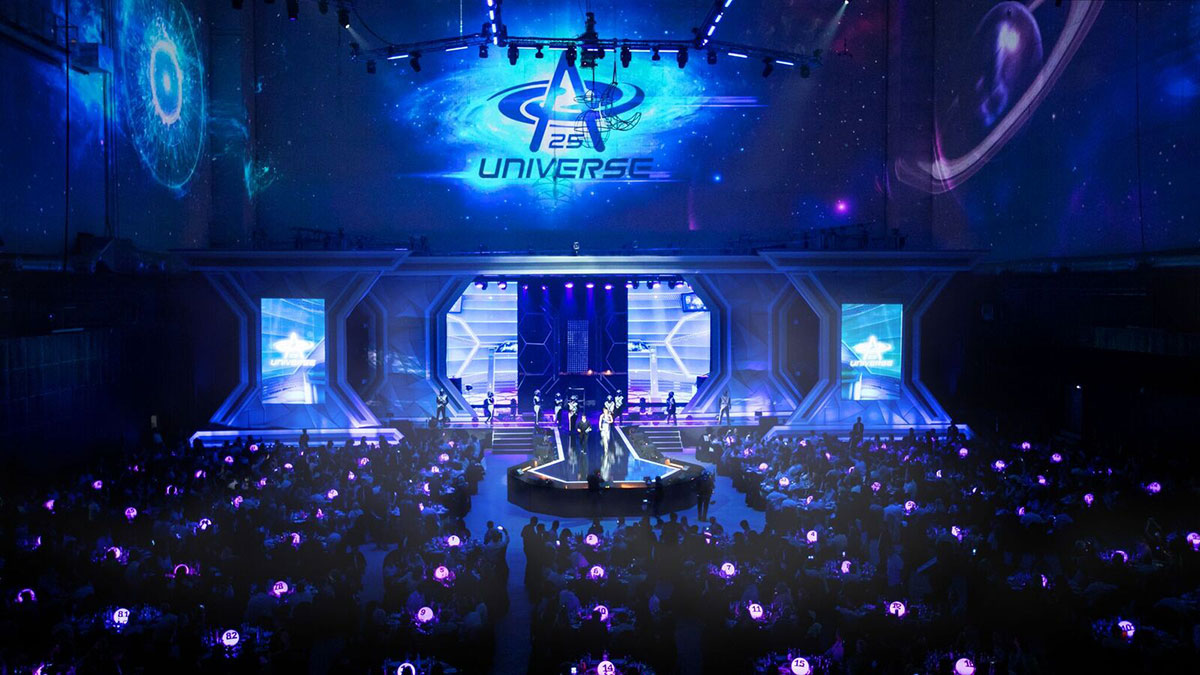 The second event was Analpa’s 25th Anniversary, hosted at one of Moscow’s live music venues, Tesla Place. For this event MAX \ MAX once again had to create two vastly different lighting looks for the evening using the same rig set-up and fixture options.

“Our client wanted to open the show with a timecoded light display,” says Martynov. To create the opening light show, Martynov selected the Claypaky B-EYE K20, Claypaky Sharpy and Claypaky Mythos2 to work alongside the Scenius Profiles.

“This combination of Claypaky fixtures offered us the widest functionality and most powerful collective light output,” says Martynov. “To build what we called a ‘light picture’ around the audience, we rigged Sharpys above the entire area of the hall; this immersed the audience into the show. We also then used Claypaky’s LED strobe light, the Claypaky Stormy, as a stroboscope, but also as a wash fixture as we are big fans of its bright, powerful light.”

The light show was followed by a fashion show featuring the footwear brand and its partners, introducing a whole new set of lighting requirements for the MAX / MAX team.

“The main difficulty in creating the lighting plot for this project was the task of combining two completely different types of event,” says Martynov. “A fashion show requires accurate lighting and the correct temperature of light for TV and photos. The light show requires dynamic, spectacular effects. That’s why we decided to use the Scenius Profile, because its output is perfect for TV and photos. Its profile options and its dynamic show functions also made it a great choice for this event.”

MAX \ MAX is a Russian production design outfit specialising in the corporate and live event sectors. The company worked alongside Arlecchino Techno rental company to supply Oriflame’s 50th Anniversary event on June 17-18 and Analpa’s 25th Anniversary on 12 of August this year.