The ceremonies, broadcast on the 17 and 27 of September to 57 countries worldwide, featured giant projection-mapped sets, pyrotechnics and sweeping light displays. For the Opening Ceremony, over 7,600 performers told the history of the Silk Road through music and dance, culminating in the lighting of the games’ ‘cauldron’ which burned throughout the 12-day event.

“Lighting alongside projection is a delicate balancing act, as the light levels we use are very low,” says Marenghi. “For AIMAG we didn’t go above 350 lux. This means that the lights we used needed to be very accurate and optically sound to create the beautiful imagery required in these large-scale productions. Claypaky has shown time and time again that their optics and reliability are well suited to these challenges.”

One of the largest challenges faced by Marenghi and his lighting team was illuminating the Opening Ceremony’s projection-mapped cylindrical central riser, claimed to be the largest of its kind ever built. The riser, dressed in a specially fabricated material, doubled as a giant projection screen for key moments in the performance. These included the dramatic lighting of the AIMAG’s ‘cauldron’ by a torch bearer, riding a specially-trained Akhal-Teke horse, a revered symbol of Turkmenistan.

“The central lift was in the middle of the field of play,” says Marenghi. “It was a real challenge to not draw attention to the set build only a few metres underneath the pit edge when lighting the field of play around it. The reliability of our lighting fixtures to retain their focus information was key. In theatre, the drift of a degree may equate to a few inches, but in a stadium this can translate to a few metres, so the accuracy and focus retention of the Claypaky fixtures was fundamental to creating this effect.” 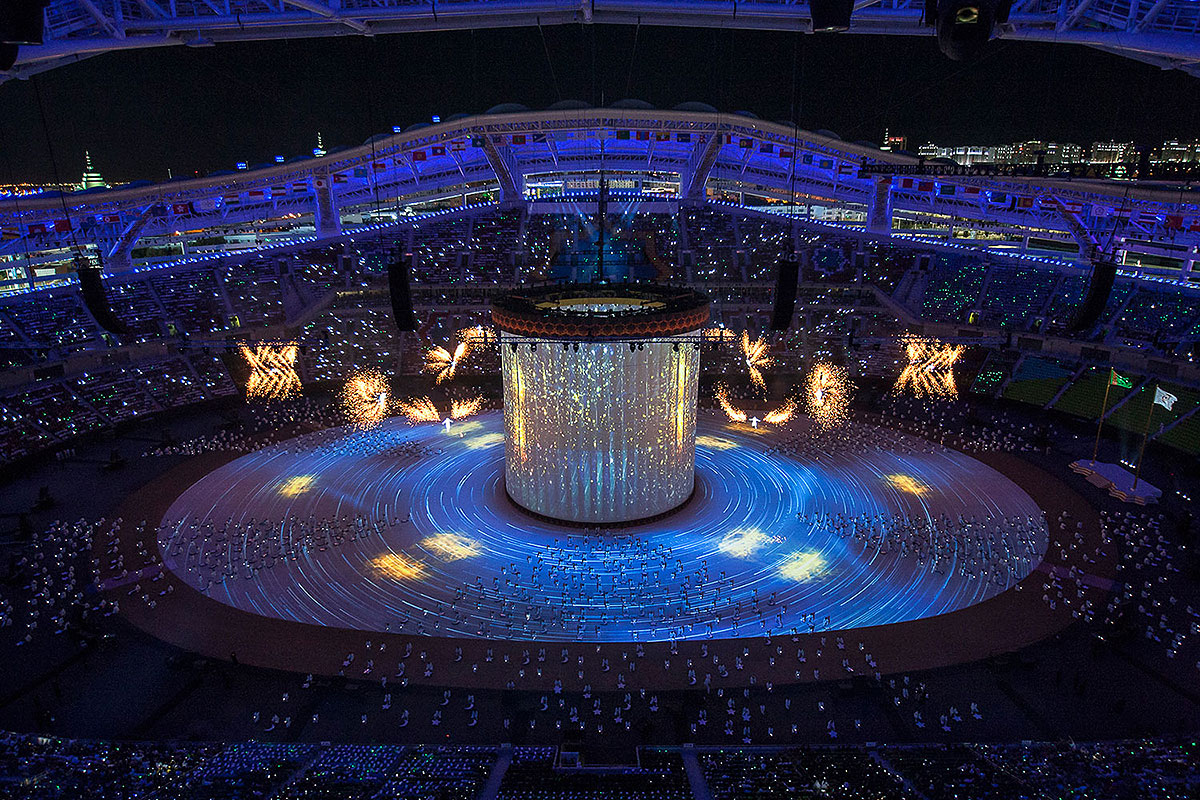 Marenghi used Claypaky’s new award-winning fixture, the Scenius Unico, around the edge of the production’s flown circular cylinder truss which was the show’s only backlight position when the production’s cylinder screen was deployed so ‘accuracy and reliability of the Claypaky product were key advantages in this situation,’ says Marenghi.

As well as a 5-55˚ linear zoom, the Scenius Unico also includes an electronic focusing element. The fixture carries a progressive and accurate framing system, engaging four individually moving blades, with both small and large dynamic profiles to achieve a pin-point accuracy.

“The Scenius Unico is a fantastic hybrid fixture,” says Marenghi. “As well as its framing system, the very high CRI of the OSRAM lamp in the fixture really makes the costumes and coloured scenery emerge.”

Also in use was the Alpha Profile 1500, “The Alpha Profile 1500s are still a great shuttered source for controlled key light,” continues Marenghi. “The Alpha Beams, Sharpys and Sharpy Washes do what they always do so well, and as usual, the Mythos were a great addition to our overall field of play and the central cylinder lighting. The Mythos were also mounted inside the cylinder screen from the circular support truss to light the action and objects inside the cylinder as they were revealed.”

“A show design is only ever as good as the team that realises it, and we were fortunate to have the team we did, and the show was quite spectacular because of it,” concludes Marenghi.