A week full of music, entertainment, business and inspiration ended on Saturday evening with a concert given by Gregory Porter and the Neue Philharmonie Frankfurt orchestra in the ‘Festhalle’. At Musikmesse and Prolight + Sound, artisanry met high-tech, violins met virtual reality and digital networking met personal encounters. The accompanying Musikmesse Festival not only presented highlight concerts by Samy Deluxe, Mousse T. & Glasperlenspiel, Tony Carey and other stars at the Exhibition Centre but also filled around 50 clubs and hotels in Frankfurt with music. At the new Musikmesse Plaza, music fans came into their own after the trade fairs with a pop-up market including direct sales and numerous events on Saturday.

A total of more than 85,000 visitors made their way to Messe Frankfurt while around 25,000 music fans enjoyed Musikmesse Festival events at a variety of clubs and hotels in Frankfurt. The greater emphasis on the exchange of ideas and information between specialists from the music and event business resulted in a high proportion of trade visitors – 76 percent – 45 percent of whom were top managers. Over half of the trade visitors came from outside Germany, from 130 countries from Iceland to New Zealand.

“In five days, we have revealed the direction being taken by consumption and production in the music and entertainment business: towards greater dynamism, diversity and digitalisation. This was not only demonstrated by the large number of exhibitors and artists at the Exhibition Centre but also throughout the whole city. Together with partners from the industry, the creative business and the music scene, we will continue to take up the complex challenges facing the sectors and generate value added for them with our two trade fairs”, says Detlef Braun, Member of the Executive Board of Messe Frankfurt. 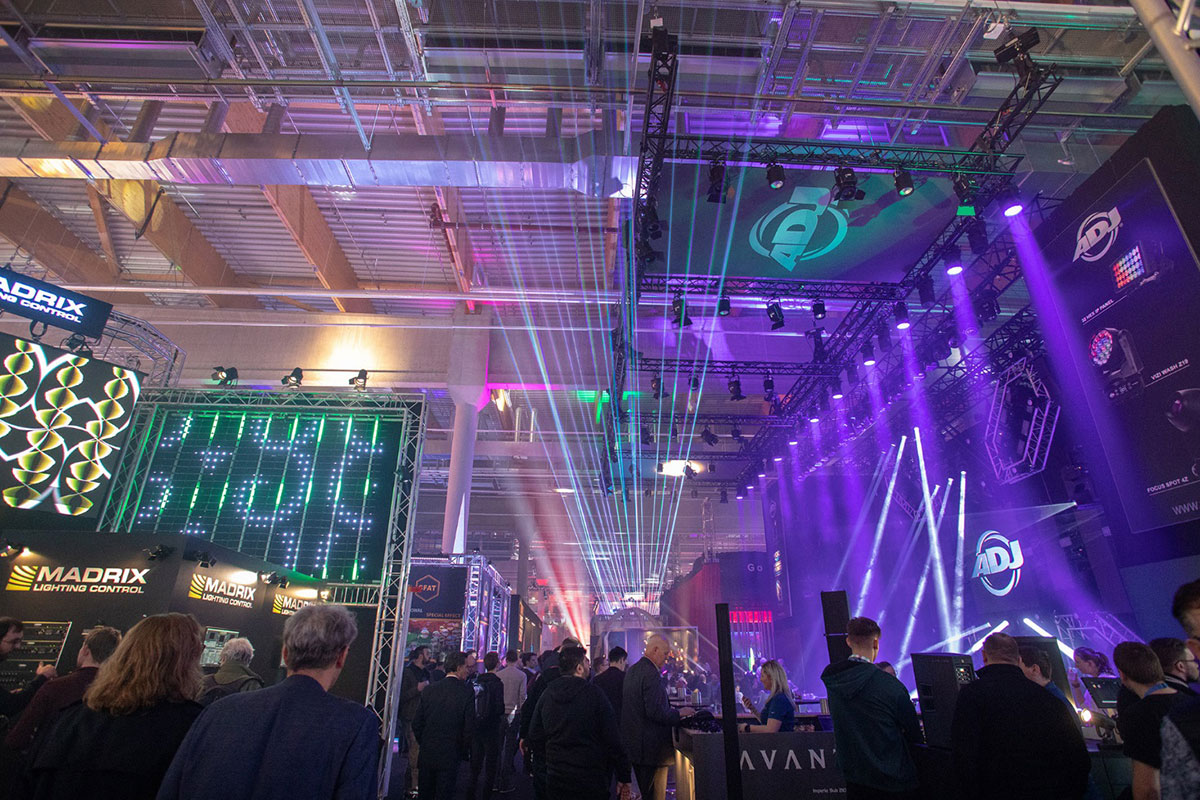 Prolight + Sound presents the event sector in the best light

Prolight + Sound illustrated the innovative strength of the entertainment industry with spectacular product presentations and an even more extensive professional-development programme. Clear was the trend to IP-based transmission technology: complex media installations and stage set-ups are increasingly being controlled via central networks and thus promoting the spread of the Internet of Things in the event business. “The trend to connectivity is now really gaining ground and opening up completely new perspectives for us and our sector”, says Gunnar Eberhardt, Head of Entertainment & Architecture Lighting’ at Osram GmbH. “We are very pleased with this year’s Prolight + Sound. It is the world’s most professional fair for the entertainment sector and has the broadest audience of visitors. With our products, we cover all parts of the entertainment-lighting segment: from show and theatre, via museums, to façade lighting. Here in Frankfurt, we meet the right people and customers for all areas of applications, and that from all over the world.”

A particularly successful part of the complementary programme of events proved to be the ‘Immersive Technology Forum’ where visitors could take part in lectures and live demonstrations revolving around technologies for virtual and augmented reality, immersive audio, holography, 3D mapping and other spectacular entertainment trends. “For us, the Immersive Technology Forum was an excellent opportunity to showcase our immersive sound system to the trade visitors at the fair”, said Mary Beth Henson, Head of Communications at L-Acoustics. “Business at the fair was really very good. Highly successful was our new demonstration room, where we welcomed more customers in the first two days than in the whole of last year’s fair.”

For the first time, the new Hall 12 was integrated into Prolight + Sound. The Exhibition Centre’s biggest and most modern hall was a great success among exhibitors confirmed Sabine Siller, Marketing Manager of cast C. Adolph & RST Distribution GmbH: “We like Hall 12 very much and it provided the perfect setting for our ‘Cast & Friends’ area. The proximity to our partners generated unrivalled synergies. This is also because Prolight + Sound is the fair with the most international brands on show.”

LED technology has been a vital driving force for growth in the sector for many years – and there seems to be no limit in sight on the positive development of this market segment. For example, suppliers of big screens and video walls benefited from the impetus of the sector at Prolight + Sound: “We are more than pleased with the result: our exhibition stand was very busy on all four days and we welcomed numerous international trade visitors. Particularly impressive was the high visitor standard. The advisory and sales discussions showed clearly that Prolight + Sound is the right place for us and the ideal business networking platform. We will certainly be back again in 2020”, said Christoph Pfäffle of Unilumin Germany GmbH.

New technologies bring new opportunities and new risks – for everyone involved in the music business. More than ever before, Musikmesse has been positioned as the source of inspiration for innovative forms of musical expression, trends for song production and audio engineering, the online trade, customer retention via social media and career scenarios in the 21st century music industry.

What the guitar and drums are for rock musicians are the midi controller and digital audio workstation for many young musicians. With the première of the ‘Sample Music Festival Area’, Musikmesse showed how electronic music can be produced live on the stage and how DJ artists are set to become live performers. Well-known brands, such as Akai, Denon DJ, Rane, Ortofon and Mixars, presented innovative production tools in the area. Another innovation was ‘MTF Frankfurt’, organised by the international ‘Music Tech Fest’ think tank. It brought together product developers and decision makers and, at innovation master classes, illuminated subjects such as design thinking and ideas management. During the fair, new instruments were created, vocal-AI technologies developed and electro-tracks laid down in a 24-hour ‘Trackathon’. “The fair was the perfect context for this meeting of minds – and such an incredibly well-organised, professional event. MTF Frankfurt was hosted with such care, warmth and attention to detail. We are looking forward to developing this relationship further and expanding the MTF innovation platform within Musikmesse 2020.”, said Andrew Dubber, Director of the Music Tech Fest.

Topics relating to music education, professional development and professionalisation were more present than ever before at the new ‘Music Education Centre’ that formed, inter alia, the setting for the ‘School Classes Make Music’ conference, the presentation of the ‘European School Music Award’ and the ‘Discover Music’ project that once again sent thousands of children and beginners on a journey of discovery in the world of musical instruments. At workshops and lectures, experts offered tips about self-marketing via YouTube, Instagram, etc. The music-creator community was able to make contact with decision makers from record labels and perform live to A&Rs at the ‘European Songwriting Awards’ (ESA) and ‘SongsCon’. “We rate the ESA as having been a complete success: this year’s contest, the second, trebled in size in terms of the number of participants, as well as visitors to the award show where hundreds applauded the winners,” said Nadja Paul, ESA and SongsCon organiser. “Jeffrey, the winner of the live final in the singer-songwriter category, went straight from the ESA stage to the Festival Arena where, completely overwhelmed, he opened the show of Mousse T. and Glasperlenspiel!”, added co-organiser Uli Kuppel. This part of the programme was rounded off by a fully booked-up songwriting masterclass with producer Matthew Tasa (Xavier Naidoo, etc) and a songwriting camp where creative musicians worked together on tomorrow’s hits.

A concomitant phenomenon of the connected age in which suppliers from all over the world compete is predatory pricing with manufacturers and retailers fighting to retain their profit margins. The challenging overall situation in the musical-instrument marked was also reflected in a smaller total exhibition size at Musikmesse, but with a more pronounced business orientation. “We were very busy and are satisfied with the course of business at the fair. We made many high-grade contacts and met customers not only from Europe but also from China, Korea and Japan. Moreover, we were very pleased with the great media reach to our 100th anniversary”, said Ralph Voggenreiter, Co-CEO of Voggenreiter Verlag GmbH.

In addition to meeting existing and potential customers, numerous exhibitors played an active role in the complementary programme of events and presented their endorsers and products on the Exhibition Centre stages and in Frankfurt’s clubs. “We see this as a great opportunity to promote a brand and have already developed initial ideas on how we can get involved in next year’s event programme”, said Zero Sette CEO Alessio Gerundini. “To take part in this year’s Musikmesse was the right decision. The fair is very important as the European meeting place – thanks, too, to Frankfurt’s central location on the continent. The sector should recognise and take advantage of this potential.”

Preparations for the coming anniversary year are already being made. Then, Musikmesse will celebrate its 40th birthday and Prolight + Sound its 25th. Immediately after this year’s fairs, the management of Messe Frankfurt will contact the sector’s players and evaluate the results of the visitor and exhibitor polls in detail. Soon, Messe Frankfurt will announce details of the event concepts for 2020, which take the best possible account of the needs of manufacturers and professional market participants in the dynamic environment of today’s market.

Further information about Musikmesse and Prolight + Sound can be found at www.musikmesse.com and www.prolight-sound.com.