Robert Juliat added some French flavour to the celebrated Spanish music festival at Cap Roig, Girona this summer. Produced by Clipper’s Live, Cap Roig Festival is one of the most recognised summer music festivals and takes place in a spectacular natural setting overlooking the Mediterranean.

The festival originated in 1927 when it began as an art and architectural and music show. This, the 6th edition of the festival in its present form, ran from 7th July to 22nd August 2017 in a site spread over 17 hectares of gorgeous gardens, complete with castle. The line-up of singers and bands included Anastacia, Passenger, Silvia Pérez Cruz, Norah Jones, Wilco, Woody Allen, Els Amics de les Arts and The Pretenders.

Merlin and Aramis are two of Robert Juliat’s most popular followspots and the team from ABS rigged two of each on front of house towers for maximum effect. From here, Merlin and Aramis were put through their paces and showed themselves able to cut cleanly through the lighting from a large rig of moving lights and haze, demonstrating their extreme capabilities and proving perfect for the job.

“Followspots are an important part of the show and many artists request Robert Juliat products,” says Iker Gartzia of ABS. “We want the best for our clients and know that when we use Robert Juliat equipment there will be no problems with the show.”

Both Merlin and Aramis are ideal for a festival such as Cap Roig. Merlin in particular is designed specifically for touring and music events. Powerful and rugged, it has a massive 3° – 12° zoom that make it uniquely suitable for both medium and long range applications in one followspot. Aramis is, of course, an old favourite: its 4.5° – 8° zoom and durable construction withstands the rigours of touring and is well-suited to long throws in large venues, both in and out doors. 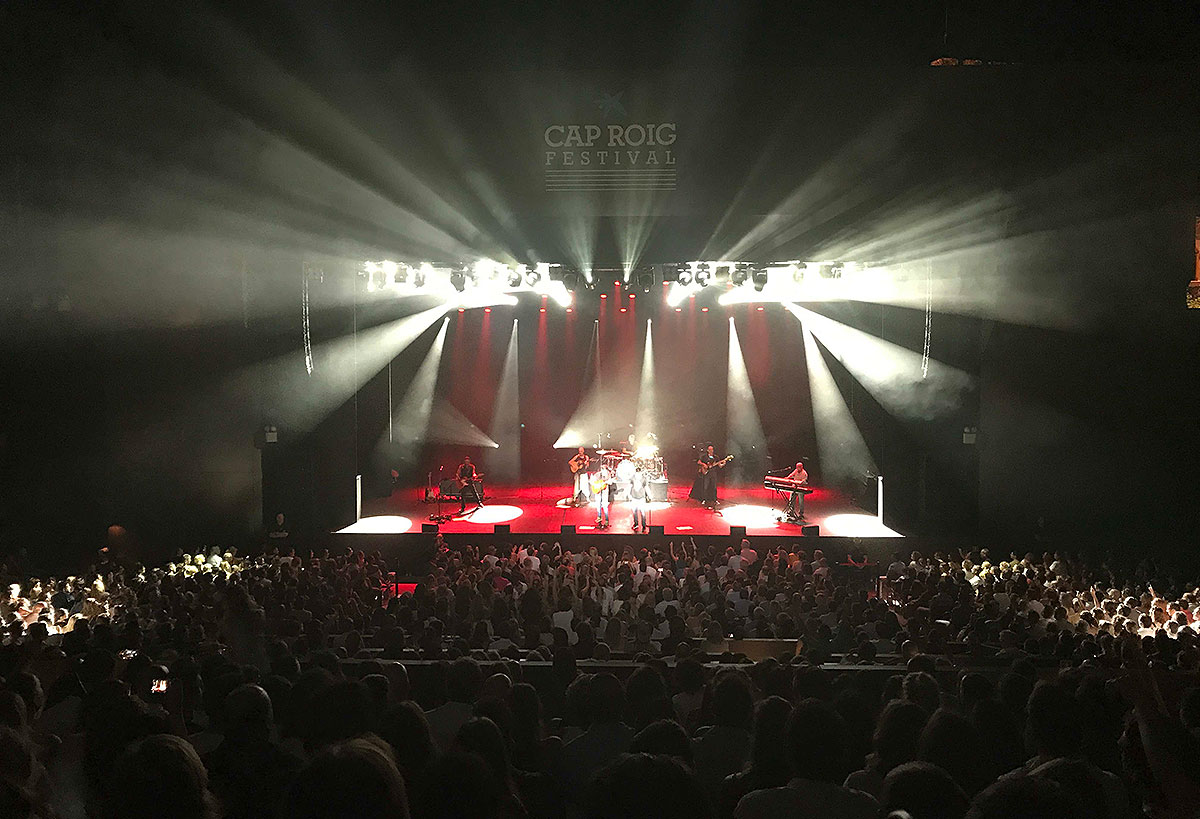 ‘Both Merlin and Aramis made such an impact at the Cap Roig due to their spectacular and excellent performance,’ says Diana García, marketing manager at Entertainment Equipment Supplies (EES), Robert Juliat’s exclusive distributor for Spain. “The performance of the RJ followspots brought into focus the commitment of ABS Entertainment Service and Robert Juliat to true quality. It is been great to team up with them for such great project!’

Robert Juliat was delighted to hear that the festival’s assistant lighting designer and operator, Jose Luis Unzueta, was very happy with the performance and reliability of the Robert Juliat followspots, saying: “We are always glad to know that Robert Juliat has been specified – where Robert Juliat products are, we can guarantee the show will be safe!”

ABS was also extremely pleased with the followspots’ performance. “For ABS Iluminación Robert Juliat is a reference in the show industry,” concludes Gartzia. “Our journey with their followspots started years ago due to the demand for them from our customers for their shows. We started with Aramis and now we are delighted to have added Merlin to our rental inventory. The strength of the output and robustness of the build more than satisfy our expectations and those of our customers.”

For more information on Robert Juliat Merlin and Aramis followspots and the full portfolio of lighting fixtures, visit the Robert Juliat website at www.robertjuliat.com